In 2015, The Annenberg Foundation Trust at Sunnylands, the Annenberg Public Policy Center, and the National Academy of Sciences (NAS) began working together to fulfill Sunnylands’ mission to host “meetings of leaders and specialists in the major medical and scientific associations and institutions for the purpose of promoting and facilitating the exchange of ideas … to make advancements … for the common good and the public interest.”

During the first five years (2015-2020), these partner organizations, joined by the National Academies of Sciences, Engineering, and Medicine (NASEM), have convened eight Sunnylands retreats. At these convenings, leaders in science, academia, business, medical ethics, the judiciary and the bar, government, and scientific publishing explored ways to increase the integrity of science; articulate the ethical principles that should guide scientific practice to ensure that science works at the frontiers of human knowledge in an ethical way; and protect the courts from inadvertent as well as deliberate misstatements about scientific knowledge.

Protecting the Integrity of Science

On Ensuring the Integrity of Science (February 2015)

Convened in February 2015 by National Academy of Sciences President Ralph Cicerone, then-Sunnylands President Geoff Cowan, and Sunnylands program director and APPC director Kathleen Hall Jamieson, the inaugural NAS-Sunnylands-APPC retreat brought together more than a dozen scientists at the Sunnylands estate in Rancho Mirage, Calif., to examine science’s response to the kinds of issues raised by the October 18, 2013, article in the Economist titled, “Unreliable research: Trouble at the Lab – Scientists like to think of science as self-correcting. To an alarming degree, it is not.”

The attendees included Nobel laureate Randy Schekman, professor of molecular and cell biology at the University of California, Berkeley; Bruce Alberts, former editor-in-chief of Science and a professor emeritus at the University of California, San Francisco; Robert Nerem, founding director of the Petit Institute for Bioengineering and Bioscience at Georgia Tech; and geophysicist Maria Zuber, the vice president for research at the Massachusetts Institute of Technology. The call to action that emerged from that retreat was published in the June 2015 issue of Science under the title “Self-correction in science at work.”

In his final address to the 152nd annual meeting of the National Academy of Sciences in 2015, Cicerone acknowledged the importance of that retreat. So, too, did his successor, Marcia McNutt, who attended that first Sunnylands convening in her role as the editor of Science. In her inaugural 2017 presidential address, McNutt featured two of the recommendations developed at that Sunnylands retreat: 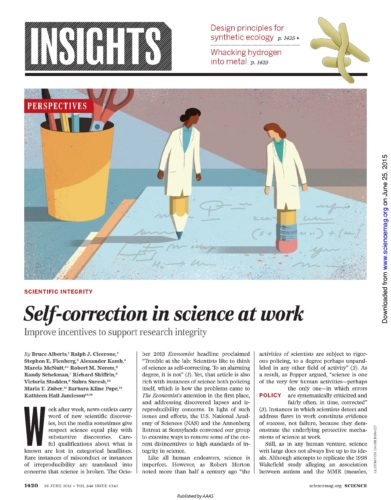 [O]ur guidance for revising our conflict-of-interest policies has its origins from a 2015 gathering at the Annenberg Retreat at Sunnylands organized by Ralph Cicerone where a small group of Academy members discussed how to bolster incentives to the highest standards of scientific integrity, and maintain the historically high trust of the public in the scientific profession. Following on the recommendations of that retreat, which were published in Science, we can begin by using more neutral language. The term “conflict of interest” implies that all relationships are necessarily corruptive. We suggest replacing it with “disclosure of relevant relationships” to encourage more complete disclosure from all parties.

CEOs and Leaders for Science (February 2016)

The partnership spawned a second Sunnylands retreat that was held in February 2016 on explaining the importance of basic research. Convened by Cowan and Jamieson as well as Robert Bradway, CEO of Amgen, and Subra Suresh, president of Carnegie Mellon University and a former director of the National Science Foundation, this retreat was attended by CEOs and business leaders, including Wanda Austin, president and CEO of Aerospace Corp.; Chevron CEO John Watson; TIAA president and CEO Roger Ferguson; and Charlie Munger, vice chairman of Berkshire Hathaway.

Among the products of the retreat were full-page Wall Street Journal and the New York Times ads in September 2016 signed by more than three dozen CEOs and business leaders endorsing the conclusion that basic scientific research is an investment in our prosperity, security, and well-being. Were it not for basic research, the message noted, the world would be without such life-altering technologies as the internet and smart phones, the hepatitis B vaccine and magnetic resonance imaging (MRI), smartphones and the Global Positioning System (GPS), solar panels and microprocessors. 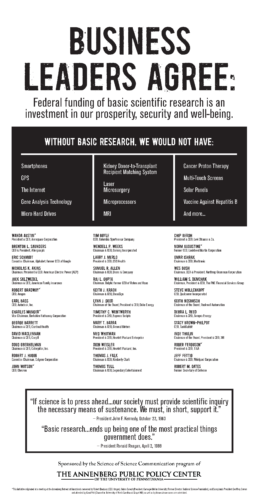 “[B]usiness leaders assembled at Sunnylands resolved to use their individual and collective credibility, and their stature as heads of enterprises that fuel the economy, to advocate for greater government support for basic scientific research to revitalize the science ecosystem,” noted Suresh and Bradway in an editorial in Science (“Business Back to Basics”). Basic research “will make or break corporations in the long term,” they declared. The retreat also resulted in distribution of a white paper on the importance of basic research both to members of congressional committees and by college and university presidents to their respective communities.

Authorship of Journal Articles in the Sciences (February 2017)

Held in February 2017, in the next follow-up to the inaugural retreat, a group of the nation’s leading scientists, scholars, and editors of science journals explored ways to ensure the integrity of science authorship. To disseminate the recommendations of that convening to the scholarly community, in March 2018 the participants published a white paper on “Transparency in authors’ contributions and responsibilities to promote integrity in scientific publication” in the Proceedings of the National Academy of Science (PNAS). 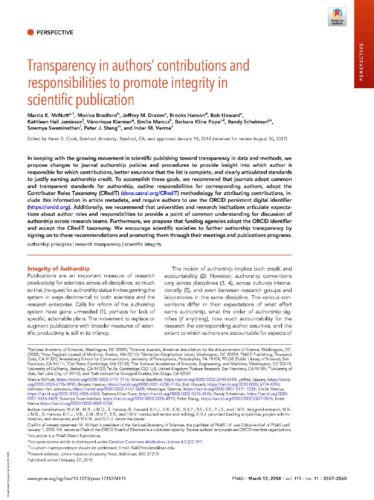 Among the authors and attendees at the NAS-Sunnylands-APPC retreat were Marcia K. McNutt, president of the National Academy of Sciences; Monica Bradford, executive editor of Science; Jeffrey Drazen, editor-in-chief of the New England Journal of Medicine; Emilie Marcus, editor-in-chief of Cell Press; Véronique Kiermer, chief scientific officer at Public Library of Science (PLOS).

In their PNAS Perspective piece, published in March 2018, the group issued a call for common standards and transparency in author contributions and responsibilities, and urged journals and research institutions to clarify the role each author plays in a study or article. The promulgated standards were designed to prevent authors from “gaming the system,” and to discourage a raft of detrimental practices such as ghost, gift, honorary, and forged authorship that can harm scientific integrity. Journals across the sciences have implemented the principles articulated in the white paper.

Increasing the Impact of the NAS: Consensus Reports for the 21st Century (February 2018)

To increase the responsiveness of NAS reports to the needs of Congress, the federal government and the nation, earlier that year, in February 2018, an NAS-Sunnylands-APPC retreat examined ways to maximize the value and impact of consensus reports prepared by the National Academy of Sciences for Congress and the executive branch. Participants included former executive branch employees who had commissioned and used such reports. The discussion and resulting white paper provided input to the NRC internal-processes transformation.

Exploring the Feasibility of an Advisory Board for Research Integrity: Has the Time Come? (November 2019)

Public trust in science has been challenged in recent years by highly publicized cases of research misconduct, irreproducible research, and instances in which conflicts of interest infected findings. While public confidence in science remains high, ensuring the excellence, integrity and trustworthiness of the scientific enterprise remains critical. To address these concerns, a November 2019 Sunnylands retreat drew together scientists, science publishers, and NGO leaders to explore the feasibility of creating a strategic council at the National Academy of Sciences to elevate the excellence and safeguard the health and welfare of scientific research. The retreat produced recommendations to help inform the plans of NAS President Marcia K. McNutt to create such an entity. In July 2021, the National Academy of Sciences announced the creation of a Strategic Council for Research Excellence, Integrity, and Trust, bringing together researchers, institutions, and policy makers to “identify challenges to the integrity and health of the research enterprise” and work to develop policies and best practices for resolving those challenges. APPC Director Kathleen Hall Jamieson was named among the council members.

In an October 2021 article published in the Proceedings of the National Academies of Sciences (PNAS) of the United States, McNutt credited the Sunnylands retreat with its role in the council’s formation:

Several reports from the National Academies of Sciences, Engineering, and Medicine (NASEM) have noted the lack of any organization charged with strengthening capacity to support research excellence across all domains … A group of stakeholders across all facets of the research enterprise convened for a retreat at the Annenberg Retreat at Sunnylands and recommended that the National Academy of Sciences (NAS) should step up to this mandate and engage the National Academy of Engineering (NAE) and National Academy of Medicine (NAM) in partnership. This recommendation furthermore aligns with two of the objectives in the Strategic Plan of the NAS: “Promote excellence and diversity in the scientific workforce” and “Support the basic research enterprise across all disciplines.” Further conversations within the Academies resulted in the Committee on Science, Engineering, and Medicine for Public Policy (COSEMPUP) agreeing to be the parent body for a “Strategic Council for Research Excellence, Integrity, and Trust.”

Articulating the Ethical Principles That Should Guide Scientific Practice (November 2017)

In November 2017, the National Academy of Sciences (NAS) and National Academy of Medicine (NAM) co-convened a retreat in partnership with The Annenberg Foundation Trust at Sunnylands and the Annenberg Public Policy Center to formulate the principles that should guide scientists working at the frontiers of the biological sciences. The gathering explored ways for scientific research and innovation to take justice into account to help remedy inequities. The retreat overview was presented by NAS President McNutt, NAM President Victor Dzau, and Sunnylands President David Lane. Among the retreat participants were medical ethics and genetic editing experts, including Jennifer Doudna of the University of California, Berkeley, one of the creators of the CRISPR-Cas9 gene-editing technique. This convening paved the way for a follow-up 2018 retreat that drafted a statement for release by the scientific community at the Second International Summit on Human Genome Editing in Hong Kong.

In advance of the Second International Summit on Human Genome Editing, that October 2018 retreat gathered representatives of the major national academies of sciences from around the globe to draft ethical principles to guide research in this area. The development of CRISPR tools for human genome editing had heightened awareness of the risks and consequences of research in this domain.

At the Annenberg Community Beach House, in Santa Monica, Calif., the scientists crafted a consensus statement establishing processes and ethical principles to guide the use of human genome editing and related research to ensure that it would be used to mitigate human diseases and protect future generations against negative consequences. Central parts of that statement were incorporated into the Hong Kong Summit’s final document.

Science in the Courts

Combating the inaccurate use of science in amicus briefs filed with the U.S. Supreme Court and lower courts was the focus of a February 28-March 2, 2019, retreat at Sunnylands titled  “Protecting Science in the Courts: Amicus Briefs and the Law.” Convened under the leadership of Nobel laureate David Baltimore and Washington, D.C., Circuit Court Judge David Tatel, the retreat addressed the challenges faced by lawyers and jurists who often have little scientific training but need to evaluate research cited in legal briefs that may include factual assertions that go beyond the scientific record.

The retreat focused on ways to increase the likelihood that the science cited in amicus briefs actually exists and is accurately used, and that the scientific publications cited can be accessed by judges. These discussions yielded insights that will enhance a forthcoming 2020 retreat on making Academy reports more accessible and useful to the courts.