A study by Annenberg Public Policy Center researchers finding that “The Colbert Report” educated viewers about campaign finance better than other media has been named the Article of the Year for 2014 by the journal Mass Communication and Society.

The award was presented last weekend at the Association for Education in Journalism and Mass Communication conference in San Francisco by Ran Wei, the journal’s editor in chief. Accepting were the study’s lead author, Bruce Hardy, formerly a senior researcher at the policy center and now an assistant professor at Temple University, and his co-author Kathleen Hall Jamieson, director of the Annenberg Public Policy Center (APPC).

Wei, the editor, said the study, “Stephen Colbert’s Civics Lesson: How Colbert Super PAC Taught Viewers About Campaign Finance,” was the first recipient of the journal’s Article of the Year award. “It stood out as the most noted and talked about study published in MC&S in 2014,” he said. “From this perspective, it is a truly deserving piece.”

The study found that viewers of “The Colbert Report” who watched faux-conservative TV host Stephen Colbert set up a super PAC and 501(c)(4) organization during the last presidential election cycle proved to be better informed about campaign financing and the role of money in politics than viewers of other news channels and shows. 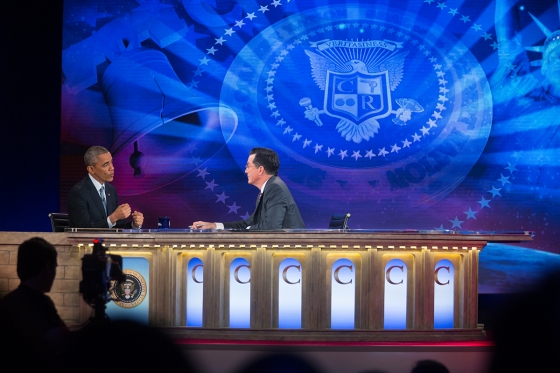 The two other authors of the study were Ken Winneg, APPC’s managing director of survey research, and Jeffrey A. Gottfried, formerly an APPC postdoctoral fellow and now a research associate at the Pew Research Center.

“The Colbert Report” ended its run in December 2014.