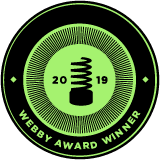 For the sixth straight year, FactCheck.org has won the Webby Award for best News & Politics website from the International Academy of Digital Arts and Sciences. The Webby Awards honor excellence on the internet, including websites, advertising, apps, videos, and more.

The 23rd annual Webby Awards received more than 13,000 entries from all 50 states and from 70 countries. In 2019, three million votes were cast by nearly one million internet users spanning 240 countries for the People’s Voice Award in each category, making this year’s competition “the biggest in our history,” according to the academy.

“It is gratifying to have the judges recognize our work once again,” said FactCheck.org Director Eugene Kiely. “It’s a particular honor given the great work done by the other nominees.”

The other finalists in the News & Politics website category were the Washington Post (which won the People’s Voice Award, a vote by readers), The Guardian, BuzzFeed News, and The Intercept. The Webby Awards also honored The Daily Beast, VICE News, Bloomberg.com, CNN, and CBSNews.com in the same category. The category is defined as “sites developed for the distribution of news, current events and politics, which “may be offshoots of established broadcast or other existing news operations, or developed specifically for online news.”

FactCheck.org, the award-winning fact-checking project of the Annenberg Public Policy Center, is a nonpartisan, nonprofit “consumer advocate” for voters. The site’s core mission is to “reduce the level of deception and confusion in U.S. politics.” The site fact-checks science-based claims via its SciCheck feature and exposes false viral claims in social media through a partnership with Facebook.