A series of papers originally presented as works-in-progress at a Zika communication summit in March 2017 at the Annenberg Public Policy Center (APPC) were published December 7, 2018, in a special issue of Risk Analysis on “Communicating About Zika.”

The special issue of the journal provides theoretical and practical insights for public health officials, risk communication researchers and risk communication practitioners, and may serve as a template for guiding and studying the dissemination of rapidly evolving health information for future and re-emerging diseases. 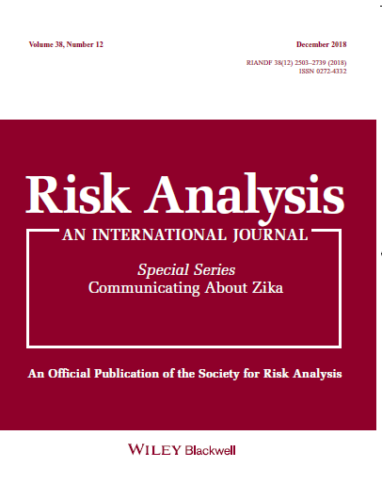 In December 2015, the Brazilian government declared the Zika outbreak a national emergency, and by mid-summer 2018 the Centers for Disease Control and Prevention (CDC) had identified 2,474 pregnant women in the United States who had confirmed evidence of Zika infection. As health officials tried to educate the public on the dangers of the virus for pregnant women and their fetuses, and preventative behavior – since the virus can be spread both sexually and by mosquitoes – new information about health risks and transmission was constantly emerging. The situation provided researchers with the opportunity to track the dissemination of information via traditional and social media as well as its uptake, amplification and modification in the U.S. and its effects on public knowledge and risk perception.

In March 2017, researchers and scholars met at APPC for a three-day Zika Communication Summit to develop research on the challenges of communicating about Zika. Eight of their papers were selected for inclusion in the current issue of Risk Analysis: An International Journal.

In the introduction to the issue, Jamieson and former APPC visiting scholars Dominique Brossard of the University of Wisconsin-Madison and William Hallman of Rutgers University say the appearance of Zika as a novel threat presented “both a challenge and an opportunity for researchers and practitioners focused on risk perception, risk communication, and precaution adoption.”

The issue begins with an article by Marin Allen, previously with the National Institutes of Health and a former APPC visiting scholar, that explains how scientific understanding of Zika virus developed over time and how North American governmental agencies, at both the federal and state levels, addressed the public communication challenges presented by this public health issue. Next in the issue is a study by Tara Kirk Sell which provides an overview of the media coverage patterns of the epidemic in the U.S. with an emphasis on the risk dimensions covered in mediated messages.

The following articles explore how media might impact risk perceptions and preventive behaviors. Hang Lu and Jonathon Schuldt use an experimental design to assess the potential effect of metaphoric framing on risk perceptions. Chun Yang and his team use survey data to analyze the relationship between personal, interpersonal and mediated communication on fear of Zika.

The potential influence of geographical locations on risk perceptions and related constructs are also explored. APPC’s Winneg, Romer and Jamieson and the CDC’s Jo Ellen Stryker analyze the differences between Florida and the rest of the U.S. to assess the influence of proximity on potential responses to an outbreak. Branden Johnson explores the relationship between residential location and psychological distance on risk views and behavior related to Zika.

The issue concludes with two pieces on the role of the online environment in risk communication regarding Zika. Sarah Vos explores the extent to which threat and efficacy information played a role in Twitter messages being retweeted and offers messaging theories based on the results. Christopher Wirz and his team – including the University of Wisconsin-Madison’s Brossard and Dietram Scheufele, both former APPC visiting scholars – examined how public discourse about Zika developed on Facebook and Twitter in English, Spanish and Portuguese, with an emphasis on blame attribution.

Articles included in the special issue on “Communicating About Zika”: