The annual Annenberg Constitution Day Civics Survey, conducted in August among more than a thousand U.S. adults, found that Americans are familiar with constitutional provisions involving impeachment and pardons, issues that are in the news.

But they know less about fundamentals like the three branches of government. 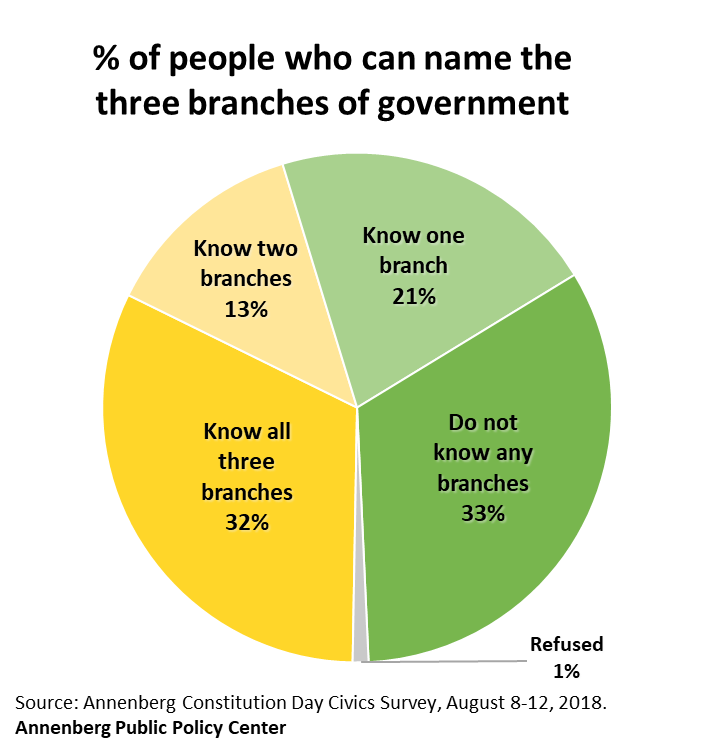 This year 32 percent of Americans were able to correctly name all three branches, an increase from last year’s 26 percent and the highest since 2014, when it was 36 percent. The rise may reflect greater awareness after a year of nonstop political news about the president, Congress, and the Supreme Court – the executive, legislative, and judicial branches. The portion of respondents who couldn’t name any of the three branches was unchanged, at 33 percent.

“It is a sad commentary on the well-being of the body politic that the ability of a third of the public to name the three branches is worthy of a headline,” said Kathleen Hall Jamieson, director of the Annenberg Public Policy Center (APPC) of the University of Pennsylvania. “Let’s hope that this year’s increase will be followed by steady increases in the following years.”

The 2018 Annenberg civics knowledge survey, released for Constitution Day (Sept. 17), found that many people do not know how the branches of government work:

Higher knowledge about impeachment and pardons

The survey found that a substantial majority of Americans is knowledgeable about some issues, including impeachment and pardons:

Respondents were asked if they agreed or disagreed with two statements on the Supreme Court:

The survey found a significant relationship between constitutional knowledge and protecting the Supreme Court. An analysis of responses to four of the key knowledge questions found that people who correctly answered all four strongly opposed weakening or getting rid of the court. Those items concerned the names of the three branches; what it takes for Congress to override a veto; who confirms a Supreme Court justice; and what a 5-4 Supreme Court ruling means.

“We found a direct relationship between basic knowledge about the three branches of government and wanting to protect the independence of the courts,” said APPC distinguished research fellow Bruce Hardy, an assistant professor of communication and social influence at Temple University.

Jamieson said, “The survey shows the important role that understanding of the Constitution plays in the public’s support for an independent judiciary. But it is worrisome both that 1 in 5 would consider doing away with the Supreme Court if it were to issue a lot of unpopular decisions and that 1 in 4 think it would be OK for Congress to strip jurisdiction from the court in instances in which it disagrees with the court’s ruling.

“High-quality civics education is not a luxury,” Jamieson added. “One is unlikely to appreciate or defend constitutional prerogatives or rights one does not understand.”

The civics knowledge survey for the Annenberg Public Policy Center was conducted by phone from August 8-12, 2018, among 1,008 U.S. adults by SSRS, an independent research company. The margin of error is ±3.8 percent. (See the accompanying Appendix for the details and questions.)

APPC’s Annenberg Classroom is one of more than 30 nonpartisan partners in the Civics Renewal Network (CRN), which seeks to raise the visibility of civics education by providing free, high-quality resources for teachers of all grade levels. Many of the organizations sponsor activities for Constitution Day, which celebrates the signing of the Constitution in 1787, including:

Coming soon: Next month the Annenberg Public Policy Center, home of Annenberg Classroom and FactCheck.org, and iCivics will release a media literacy game for secondary school students through adults, teaching them how to confirm information and identify misinformation.