For Constitution Day, the Leonore Annenberg Institute for Civics at the Annenberg Public Policy Center (APPC) has taken steps to expand its civics education mission from K-12 schools to adult civics education, focusing on higher education, the military, and the business community. To achieve its goal of improving civics knowledge for adults, the policy center has awarded a total of $340,000 to four partners in the Civics Renewal Network to develop and disseminate high-quality instructional materials and programs for the military and for community colleges.

The funding is being provided through a Leonore Annenberg Institute for Civics initiative called the Civic Mission of the Nation. Americans today live in one of the more polarized eras in our nation’s history, in which some of our long-held beliefs have been severely challenged. Some citizens are losing confidence in our institutions of governance. Yet many Americans are ill-equipped to defend the democratic ideals at the heart of our Republic. There is ample evidence that many Americans hold a tenuous grasp of key civics knowledge. Conducted annually since 2013 by APPC, the Annenberg Constitution Day Civics Survey has found that many Americans do not understand basic facts about the Constitution and about how our government works. 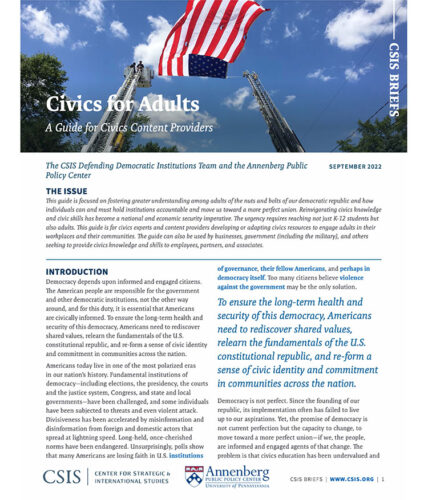 In partnership with the Center for Strategic and International Studies (CSIS), APPC has also launched a Civics for Adults Guide that will help civics content providers develop new instructional materials and adapt existing ones for adults. Businesses, government (including the military) and others who wish to offer civics knowledge programs and civic skills to employees can also use the guide. The guide was developed by CSIS and APPC following a series of round tables and interviews with bipartisan experts and leaders from the national security, business, and education and civics communities.

Civics education for adults and the military

To help improve adult civics education, the Civic Mission of the Nation initiative has funded four projects, which will be available by Constitution Day 2023 and accessible on the organizations’ websites and the Civics Renewal Network website:

ABA Division for Public Education: Awarded $96,250 for its project, “Civic Knowledge for U.S. Military,” which will create a series of six short videos, with supporting resources, to increase the knowledge of members of the American military about these topics. The Constitution and Service Member Oath to Defend It; The Judicial System and the Rule of Law; Federalism and the Separation of Powers; Military Law within the American Constitutional System; Identifying False Information and the Cyber Threat from Foreign Adversaries; and The Electoral Process.

Gilder Lehrman Institute of American History: Awarded $74,712 for its project, “A Civic Mission of the Nation Learning Guide,” which will offer foundational knowledge on the three branches/separation of powers, jury service, Bill of Rights, rule of law, federalism, voting, and civil dialogue. Scholars will contribute overviews of one of the subjects and deliver a short video lecture. Community college students will create educational materials on one of the subjects and share their materials with their local community. The Institute will partner with LaGuardia Community College, whose enrollment is largely first-generation Americans. These students will translate their materials into their heritage language and share them with their immigrant community.

Indiana University Center on Representative Government: Awarded $69,524 for its project, “Everyday Civics: Tools for Daily Living,” which will help adults raise their level of understanding about the American system of federalism, checks and balances, and how they apply to everyday life. The interactive project will also address the perception of powerlessness felt by citizens when they do not know who or where to turn to for help with a problem. The Center will partner with Ivy Tech Community College in Indiana and Walters State Community College in Tennessee.

About the Civics Renewal Network: A project of the Leonore Annenberg Institute for Civics at APPC, the Civics Renewal Network is a consortium of 39 of the leading nonpartisan, nonprofit organizations committed to strengthening civic life in the United States by increasing the quality of civics education in our nation’s schools and by improving accessibility to high-quality, no-cost learning materials. On the CRN website, teachers can find excellent resources from these organizations, searchable by subject, grade, resource type, standards, and teaching strategy.