In July, New York State health officials notified the Centers for Disease Control and Prevention (CDC) of a case of paralytic polio in an unvaccinated adult in Rockland County, N.Y. Wastewater samples from communities near the patient’s home confirmed that poliovirus was present in those areas. The virus has been found in wastewater samples in New York City, as well.

Polio was once one of the most feared diseases in the United States, according to the CDC. The polio vaccine used in the United States protects against severe disease in nearly everyone – 99 out of 100 people – who has received all four recommended doses. Among U.S. kindergarten students, the CDC reports that 93% had received all four doses by the 2020-21 school year. But the statewide polio vaccination rate in New York state was under 79%.

Despite the renewed threat, the latest Annenberg Science Knowledge (ASK) national panel survey by the Annenberg Public Policy Center finds that a sizable portion of the U.S. public is unfamiliar with the risks of polio.

The latest survey, conducted in October, examines public knowledge and beliefs about the poliovirus, the bivalent Covid-19 vaccine booster, monkeypox, and other matters of public health.

“The victory over polio is one of the great medical achievements of the 20th century,” said Kathleen Hall Jamieson, director of the Annenberg Public Policy Center. “It would be tragic if under-vaccination were to jeopardize that accomplishment.”

The nationally representative panel of 1,572 U.S. adults surveyed by SSRS for the Annenberg Public Policy Center of the University (APPC) of Pennsylvania from October 11-18, 2022, was the ninth wave of an Annenberg Science Knowledge survey whose respondents were first empaneled in April 2021. The margin of sampling error (MOE) is ± 3.4 percentage points at the 95% confidence level. See the Appendix and Methodology for additional information.

What the public knows about polio

The latest wave of the ASK survey finds that much of the public is knowledgeable about certain aspects of polio but there are substantial levels of uncertainty: 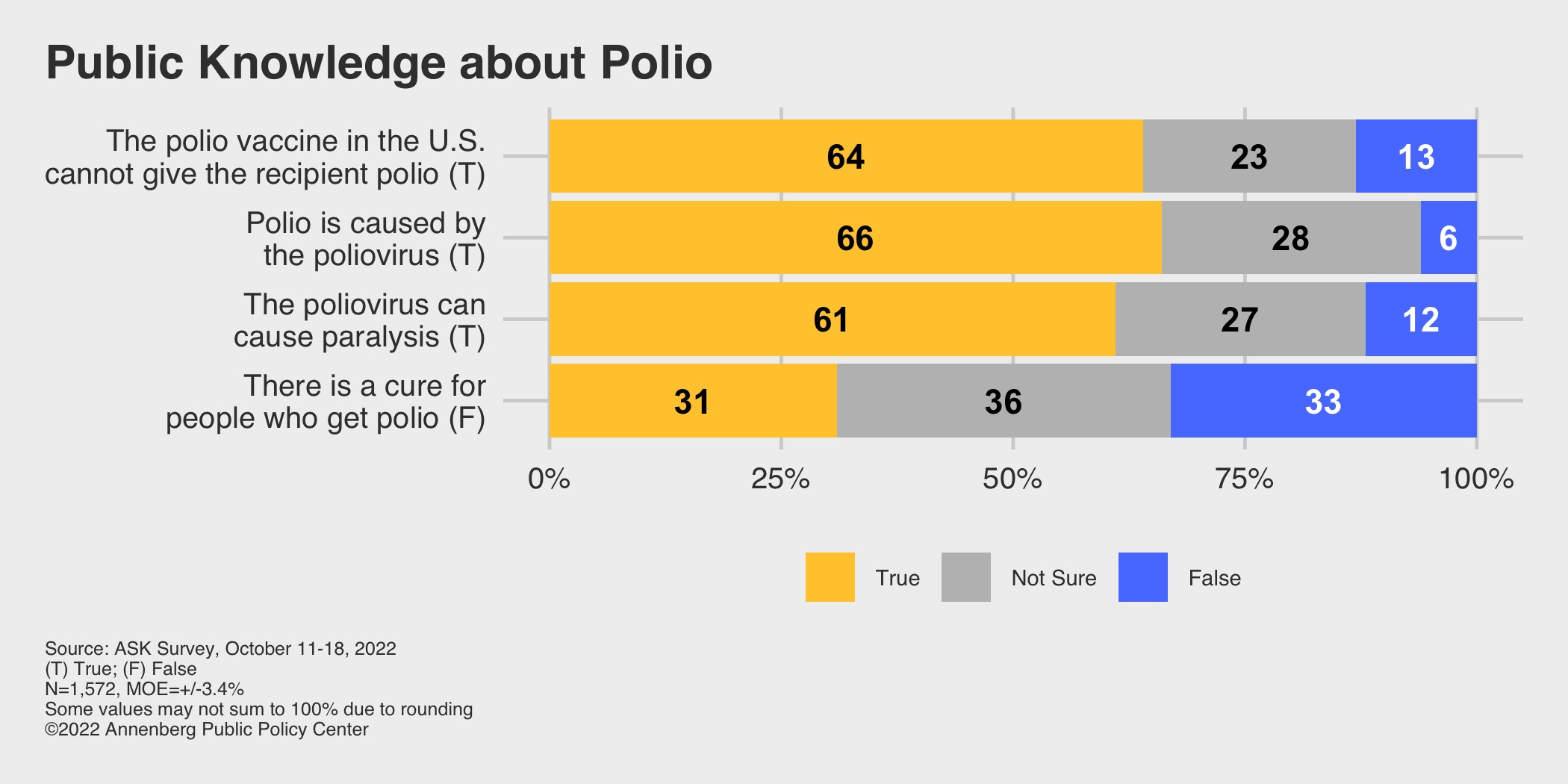 Higher risk for polio: Most of the survey respondents are unsure about practices that would put a person at higher risk for contracting polio:

This fall, the CDC recommended a bivalent mRNA Covid-19 vaccine booster dose for people ages five and older, to be given at least two months after the primary vaccine series or another booster (the CDC also says “you may consider delaying” a vaccine primary dose or booster three months after symptomatic Covid or a positive Covid test). The bivalent booster is designed to target the original version of the coronavirus that causes Covid-19 as well as two omicron subvariants. The two subvariants accounted for most cases in the United States as of late August. (See FactCheck.org’s Q&A on the booster.)

Although survey respondents overwhelmingly say they do not have concerns about the safety or effectiveness of the new booster, they show much less acceptance of it than the vaccines against polio or monkeypox:

Views on the bivalent Covid booster

While interest in getting the Covid booster is weaker than for some other vaccines, the survey respondents think that younger and older people would benefit from getting it.

The survey finds that 60% of the public says that if someone in their household was 5 to 18 years old, they’d be likely to recommend that that person get the updated Covid-19 booster (asked of a subsample). More (69%) say it’s likely that a healthy young person would benefit from getting the new booster, which targets both the original coronavirus and the BA.4 and BA.5 variants. Nearly 4 out of 5 people (79%) say it’s likely that a person over 65 years old would benefit from taking the booster.

How bad would it be to get … polio? Monkeypox? Long Covid?

There is greater concern about getting “long Covid,” the series of lingering harmful effects such as fatigue and neurological problems that may follow infection with Covid-19, than with getting Covid-19 itself. Asked how bad it would be to have different diseases and illnesses, the public sees long Covid as not as bad as skin cancer but as bad as monkeypox and worse than measles: 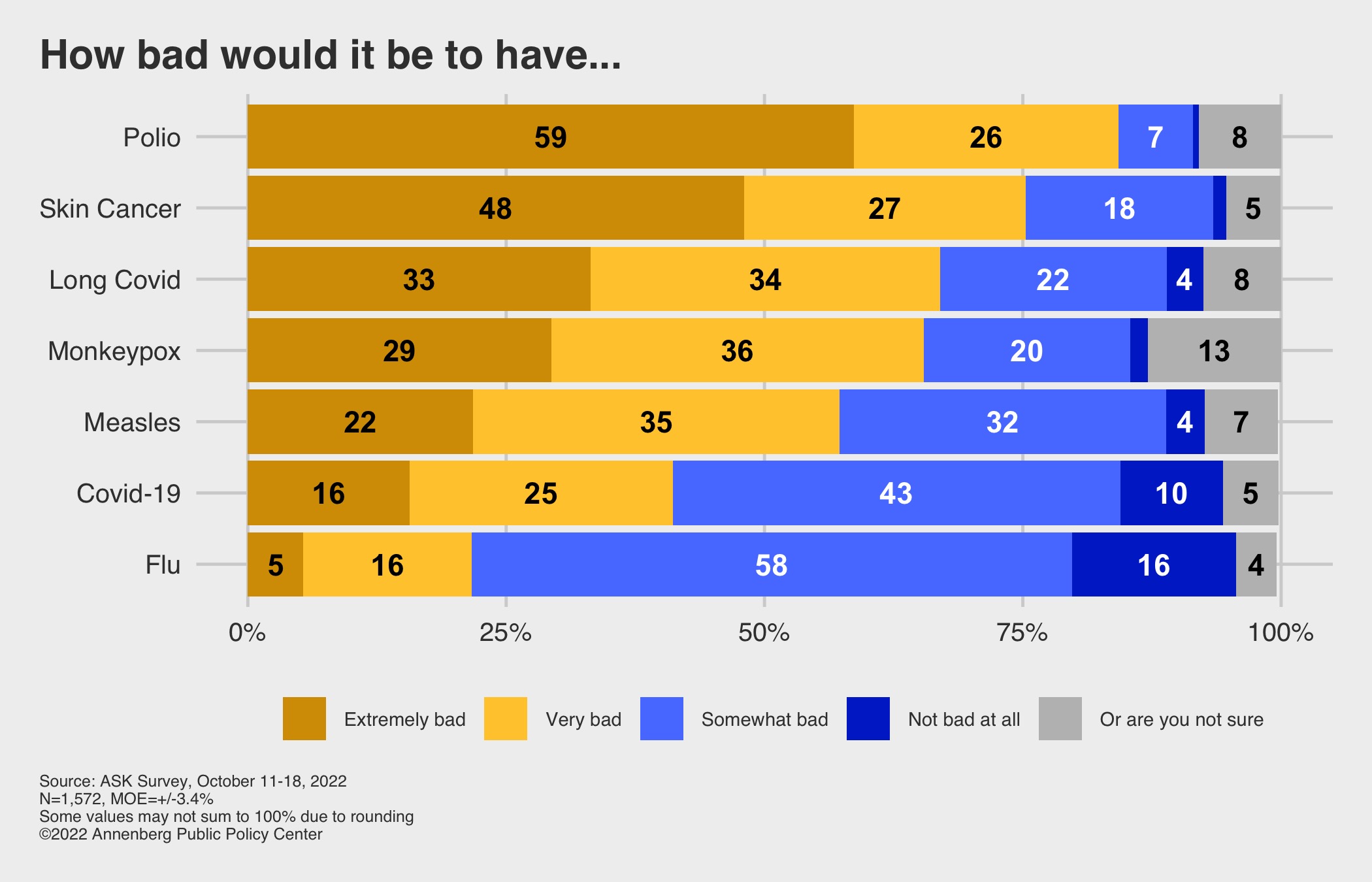 “With uptake of the bivalent vaccine worrisomely low,” Jamieson noted, “it is important that the public know that some studies have found the risk of long Covid is lower after vaccination.” Under 12% of the U.S. adult population has had the updated bivalent booster, the CDC says.

The relatively lower level of concern with getting Covid may reflect our survey respondents’ real-world experience: 47% of our survey panel say they have tested positive for Covid-19 and 23% of this Covid-positive group has had it more than once (which is equivalent to 11% of the overall U.S. population). Far fewer people (6%) say they have or have had long Covid (11% are not sure). A larger group of respondents (29%) know someone who has experienced long Covid.

A continuing return to normal

When asked when they expect to be able to return to their normal, pre-Covid-19 lives, nearly half of those surveyed in October (47%) say they already have, up from 41% in July, 32% in April, and 16% in January. Those who feel the return to normal is still more than a year away is down to 13%, from 19% in July. 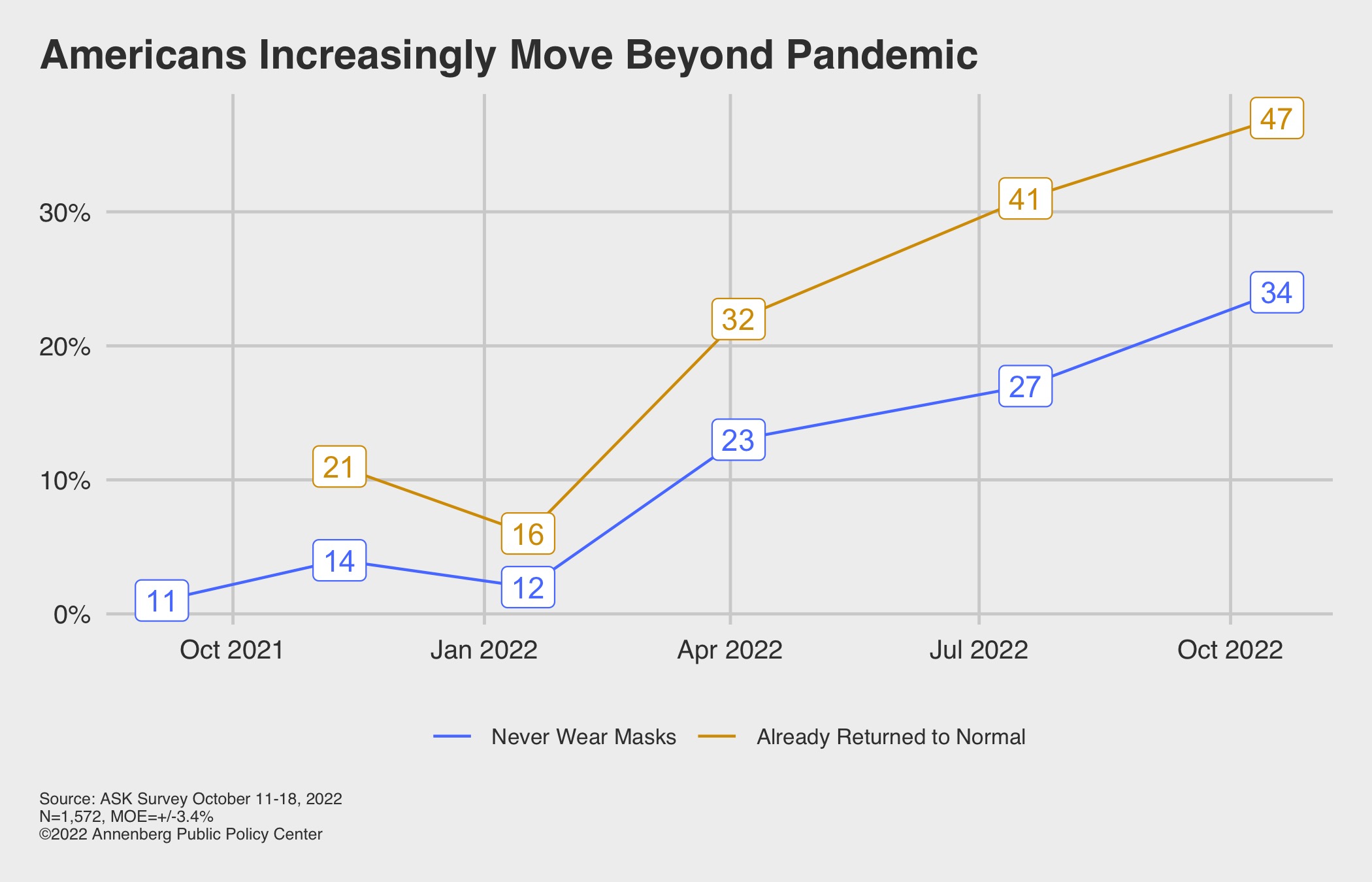 See the Appendix for question wording and data and the Methodology for additional information. Read about prior Annenberg Science Knowledge surveys.