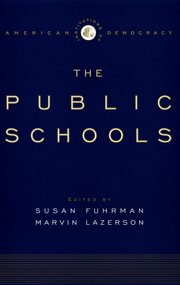 From curriculum standards and testing to school choice and civic learning, issues in American education are some of the most debated in the United States. The Institutions of American Democracy , a collection of essays by the nation’s leading education scholars and professionals, is designed to inform the debate and stimulate change. In association with the Annenberg Foundation Trust at Sunnylands and the Annenberg Public Policy Center at the University of Pennsylvania, The Institutions of American Democracy is the first in a series of books commissioned to enhance public understanding of the nature and function of democratic institutions. A national advisory board–including, among others, Nancy Kassebaum Baker, David Boren, John Brademas, Ellen Condliffe Lagemann, David Gergen, and Lee Hamilton–will guide the vision of the project, which includes future volumes on the press and the three branches of government.

Each essay in The Institutions of American Democracy addresses essential questions for policymakers, educators, and anyone committed to public education. What role should public education play in a democracy? How has that role changed through American history? Have the schools lost sight of their responsibility to teach civics and citizenship? How are current debates about education shaping the future of this democratic institution?
Among the contributors are William Galston, Director of the Institute for Philosophy and Public Policy at the University of Maryland;Clarence Stone, Professor in the Department of Government and Politics at the University of Maryland – College Park and editor ofChanging Urban Education and Regime Politics: Governing Atlanta, 1946-1988 (University Press of Kansas, 1998).; Susan Moore Johnson, Pforzheimer Professor of Education in Learning and Teaching, Harvard University; Michael Johanek, Executive Director of K-12 Professional Development, College Board; Kathy Simon, co-executive director of the Coalition for Essential Schools and author of Moral Questions in the Classroom (Yale University Press, 2001); and Jennifer Hochschild, Professor of Government and Professor of Afro-American Studies at Harvard University and author of Facing Up to the American Dream: Race, Class, and the Soul of the Nation (Princeton University Press, 1995).