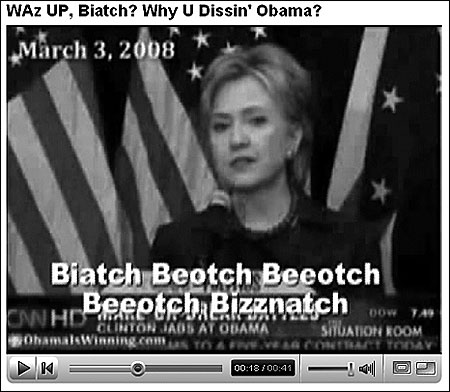 On November 13, 2007 in Hilton Head, South Carolina, a middle-aged female member of the audience asked Republican presidential contender Senator John McCain, “How do we beat the bitch?” Amid audience laughter and despite a cautioning call from a male in the audience who advised the senator to “leave it alone,” Senator McCain responded, “May I give the-ah, may I give the ah translation?” McCain then added: “But that’s an excellent question. You might know that there was a, there was a poll yesterday, a Rasmussen poll identified that shows me three points ahead of Senator Clinton in a head-to-head match up. I respect Senator Clinton. I respect anyone who gets the nomination of the Democrat Party.”

Click here to obtain the article from Nieman Reports