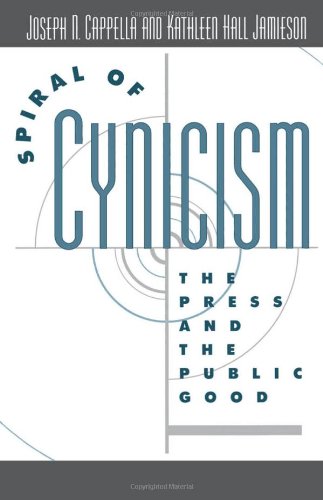 Why do some citizens vote while others do not? Why does less than half of the American voting public routinely show up at the polls? Why is it that the vast majority of political issues affecting our day-to-day lives fail to generate either public interest or understanding? These questions have troubled political scientists for decades. Here, Kathleen Hall Jamieson and Joseph N. Cappella provide the first conclusive evidence to date that it is indeed the manner in which the print and broadcast media cover political events and issues that fuels voter non-participation.

This book illustrates precisely how the media’s heavy focus on the game of politics, rather than on its substance, starts a “spiral of cynicism” that directly causes an erosion of citizen interest and, ultimately, citizen participation. Having observed voters who watched and read different sets of reports–some saturated in strategy talk, others focused on the real issues–the authors show decisive links between the way in which the media covers campaigns’ and voters’ levels of cynicism and participation. By closely monitoring media coverage among sample audiences for both the recent mayoral race in Philadelphia and the national health care reform debate, the authors confront issues concerning the effects of issue-based and competitive-based political coverage. Finally, they address the question repeatedly asked by news editors, “Will the public read or watch an alternative media coverage that has more substance?” The answer their findings so clearly reveal is “yes.”
Spiral of Cynicism is a pioneering work that will urge the media to take a close look at how it covers political events and issues, as well as its degree of culpability in current voter dissatisfaction, cynicism, and non-participation. For, in these pages, a possible cure to such ills is just what Jamieson and Cappella have to offer. Moreover, their work is likely to redefine the terms of the very debate on how politics should be covered in the future.