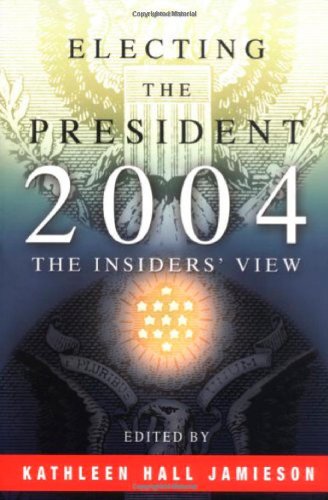 The 2004 presidential election was closely watched from all corners of the world and dominated the media for nearly a year. From the opening announcements of campaigns through the primaries and debates to the first Tuesday in November, the presidential election was ubiquitous, filling our email inboxes and directing our dinner conversation, turning us all into amateur political analysts. Electing the President, 2004 offers the views of the professional political operatives who ran the campaigns.

In this volume, the consultants who brought the country the Bush-Cheney and Kerry-Edwards contest of 2004 explain the strategies behind the ads and debates, discuss what they did and failed to do to elect their candidates, and reveal their differing perspectives on the issues that mattered. Electing the President, 2004 focuses on events from September 11 to the release of the Osama Bin Laden tape that affected the outcome of the elections. The debates, the advertising, the work of 527 groups, the campaign organizations—all these components contributed to an eventful election season, with the two campaigns continually vying for the attention of the American public. Through this analysis of strategy—their own and their opponents’—these insiders offer a ringside seat to a hotly contested democratic process.