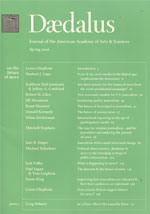 When news does its job, attentive citizens are better able to understand both the challenges facing the country and the competing visions of those seeking to lead it. Indeed, some argue that “the purpose of journalism is to provide people with the information they need to be free and self-governing.” In years past, those studying media have reliably found that consumers of traditional news were better informed about issues of national concern. However, the growth of a new media culture in which partisans are able to envelop themselves in like-minded content raises a question: in the world of ideologically tinged cable news, opinion- talk radio, and viral email, does news in any of its various incarnations still sift fact from fabrication and, in the process, heighten a voter’s knowledge about those aspiring to lead?