Now, a new panel study published in the open-access journal Scientific Reports by researchers at the Annenberg Public Policy Center addresses that question. The study shows that people who evinced a conspiracy mentality in 2019, prior to the pandemic, were subsequently more likely to believe Covid-19 conspiracy theories. Individuals who held conspiracy theories on topics such as the fluoridation of the public water system and the perpetrators of the 9/11 attacks were those most likely to report in 2021 believing that, for example, the coronavirus was created by the Chinese as a bioweapon or that Bill Gates was malevolently involved in the design of Covid vaccines.

These individuals were also more likely in January 2021 to report hesitance to be vaccinated against Covid-19.

“By reinterviewing individuals before and then during the pandemic, we are able to determine the forms of belief that predisposed some in the United States to be wary about the Covid vaccines long before the pathogen appeared on our shores,” said co-author Kathleen Hall Jamieson, director of the Annenberg Public Policy Center (APPC) of the University of Pennsylvania. “We found that having a conspiracy mindset played an important role.”

Dan Romer, the lead author and APPC’s research director, said: “The findings illustrate the importance of finding ways to undercut a conspiracy mindset in general and conspiracies about health-related matters specifically.”

The researchers reinterviewed a nationally representative panel in 2021 that had been created in 2018 to study sources of resistance to vaccination. There were 3,000 U.S. adults in the panel at baseline, and the researchers were able to re-interview 1,243 panel members in January 2021, soon after the 2020 presidential election and after the Food and Drug Administration (FDA) granted emergency use authorization for Covid-19 vaccines.

The panel had been surveyed regarding several possible sources of hesitancy that predated the pandemic, such as a lack of trust in the FDA and the Centers for Disease Control and Prevention (CDC), acceptance of misinformation about the safety and efficacy of other vaccines such as the MMR (measles, mumps, and rubella) vaccine, and the tendency to believe in conspiracy theories that challenged the credibility of health authorities and the government. When all three of these factors were included in a model to predict Covid-19 vaccination hesitancy in 2021, trust in health authorities and acceptance of misinformation in 2019 played a less significant role in predicting hesitance than did the tendency to believe in conspiracies, also known as a conspiratorial mindset.

The conspiracy mindset and the Covid vaccine 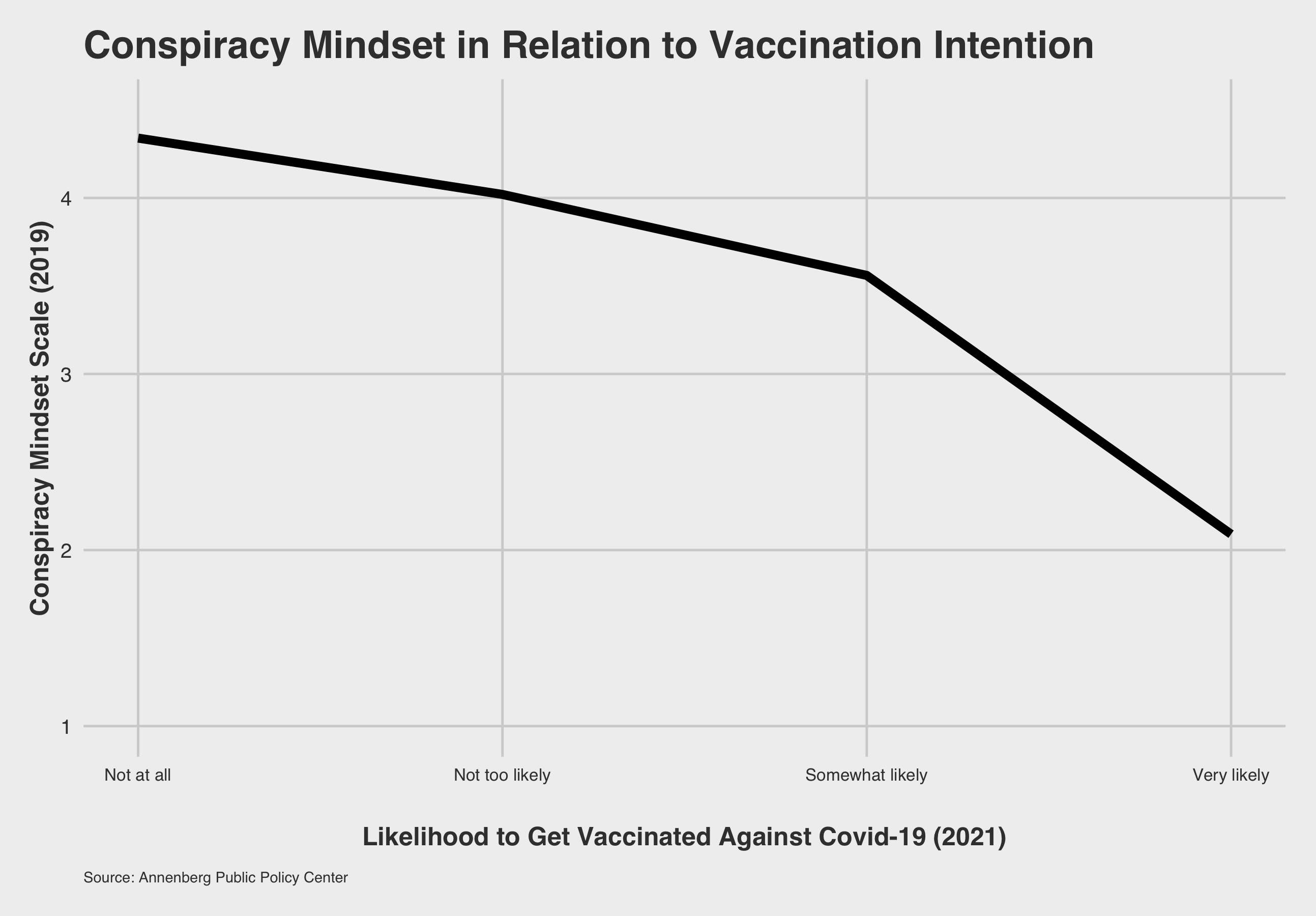 The survey found that approximately 20% of the panel was prone to accept conspiracy theories in 2019 when the mindset was measured by asking if respondents believed such conspiracy theories as that the fluoridation of public water supplies is a plot to dump hazardous waste, and that the 9/11 attacks were planned by the U.S. government. In 2021, a different measure was used that asked about more generic forms of conspiracy, such as whether our lives are controlled by plots hatched in secret places. Respondents who tended to accept the first set of conspiracies were also likely to accept the latter, more generic conspiracies, even though they were measured two years apart.

Other factors that predicted a willingness to be vaccinated against Covid were concerns about the risks of contracting Covid and the willingness to take the flu vaccine. Both predictors were also negatively associated with conspiracy thinking two years earlier.

The researchers also examined changes in the conspiratorial mindset from 2019 to 2021. They found that the political conflict that surrounded the pandemic, with Republicans more resistant to vaccination and Democrats more accepting, also seemed to increase conspiracy theory acceptance among some. Specifically, Republicans and those who relied on conservative media such as Fox News were more likely to accept conspiracy theories in 2021 than they had been in 2019. The opposite was true for Democrats, who were more likely to use mainstream media and became less willing to endorse conspiracies.

Other differences in tendencies to oppose vaccination appeared to moderate over the course of the pandemic. For example, older adults were less likely to believe misinformation about vaccines in 2021 than they had been in 2019. Similar shifts occurred for more educated and higher-income respondents.

“The major implication of our findings,” the authors write, “is that efforts to encourage acceptance of Covid-19 vaccines will hinge not only on providing information about their efficacy and safety from sources audience members find credible but also [on] improving knowledge of vaccination in general.” One strategy they suggest is to focus on increasing the knowledge level of those who are unsure about whether misinformed claims are accurate or not, rather than concentrating on dislodging already held misbeliefs, which is a more difficult task. They also suggest increasing transparency about the potential harms of vaccines and highlighting statements in support of vaccination from presumed conspiracy promoters such as former President Trump.

“Conspiratorial thinking as a precursor to opposition to COVID-19 vaccination in the US: a multi-year study from 2018 to 2021” was published online Nov. 3, 2022, in the Nature journal Scientific Reports.