In an op-ed in the Washington Post, Kathleen Hall Jamieson said debates were essential to voter understanding, and said it was important that Republican presidential nominee Donald Trump participate in all three general election presidential debates with Democratic nominee Hillary Clinton.

In the op-ed, “Trump owes it to the voters to debate with Clinton,” published on September 9, Jamieson wrote that the debates provide a critical opportunity to help voters to make sense of the candidates’ stances on issues and predict what will happen if the candidates are elected. 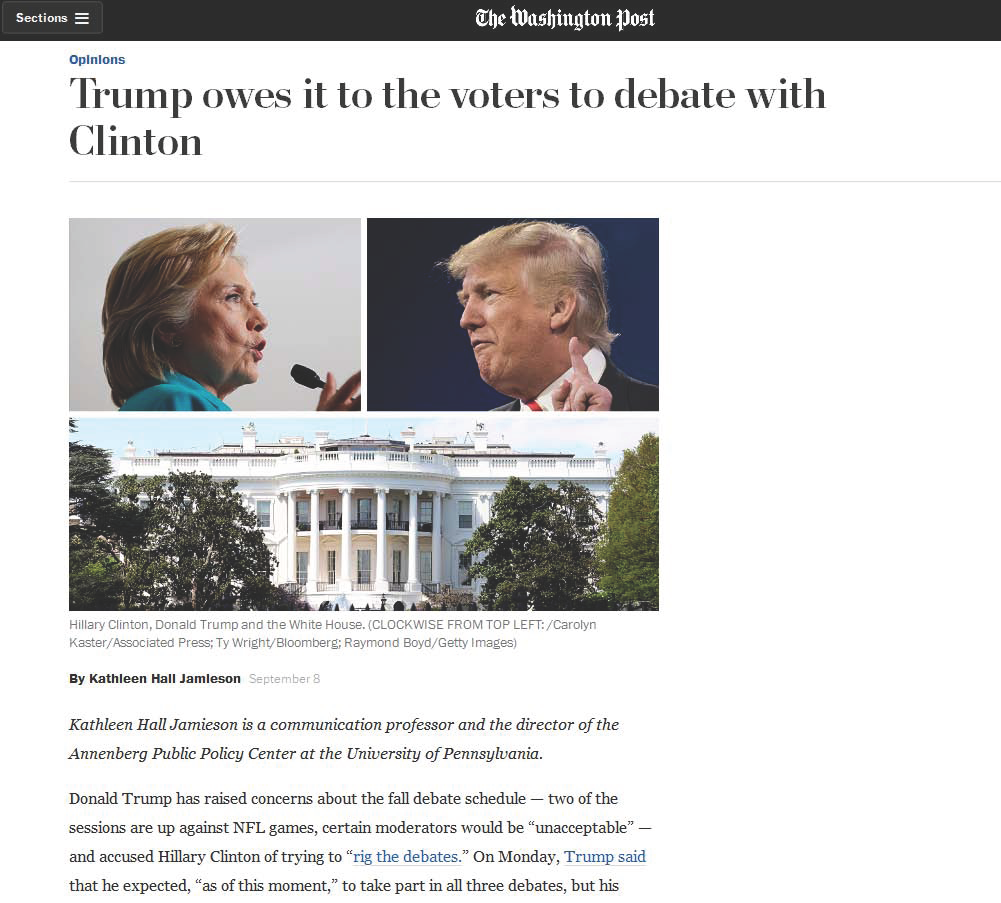 On September 5, Donald Trump said that, “as of this moment,” he expected to participate in all three debates — but he also raised concerns about the scheduling and the moderators, as well as accusing Hillary Clinton of attempts to “rig the debates.” Jamieson explained that “his complaints have raised the possibility that he could become the first nominee since Jimmy Carter in 1980 to participate in just a single general-election debate — or even the only one since Richard M. Nixon in 1972 to spurn debates altogether.”

Debates make voters more informed of the candidates’ positions, indicate what the winner will focus on during their time in office, and foreshadow relations between the president and Congress, Jamieson wrote. They provide candidates with the opportunity to explain complex issues and plans, and potentially recover from past mistakes or poor performances. As Jamieson said, skipping the debates “would be a disservice to voters, who would be cheated of valuable insight and deprived of the most important means of anticipating the contours of the next four years of governance.”

Jamieson was also one of the APPC researchers to work on the recently released white paper, “Presidential Debates: What’s Behind the Numbers?,” which analyzes data on the television audience, ratings, and motivations of viewers of general-election presidential debates. The paper was researched and written by Jamieson, former Nielsen executive and former APPC visiting scholar Jo Holz, and APPC postdoctoral fellow Heather Akin.