The Koff Award was presented to Jamieson by the group’s executive director, James Harvey, for “her 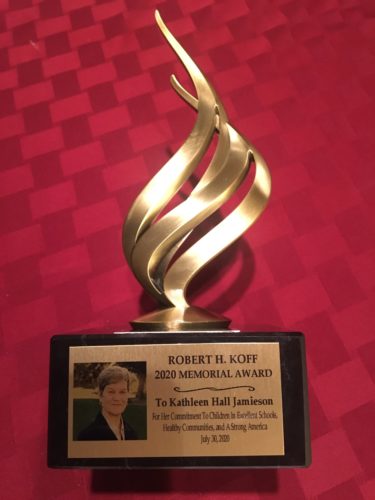 commitment to children in excellent schools, healthy communities, and a strong America.”

Koff, who passed away in 2018, founded the predecessor of the Roundtable and was, in Harvey’s words, “the godfather” of the educators’ organization. Koff “was a remarkable man,” Harvey said. “He got what needed to be done in ways that I think very few scholars or policymakers, and even most educators, understood. He realized we needed excellent schools, but they also needed to be supported by strong families and well-functioning communities.”

The National Superintendents Roundtable is a nonprofit organization of school superintendents in 30 states who are committed to “leadership for just and humane schools.” The group’s first Koff Award was presented in 2019 to Bill Purcell, former mayor of Nashville and former Majority Leader in the Tennessee House of Representatives.

Jamieson was presented with the award on July 30, following a Zoom talk to the group in which she described the public schools as being as important an institution of democracy as the executive, legislative and judicial branches of government and the free press. The public schools, she said, are the Fifth Estate.

“Public schools are the ways in which we have basically created a country,” Jamieson said. “Public schools socialized all of the immigrants that were our ancestors into a common culture. They also ensured that no matter whether you were wealthy or not — particularly if you were not — you had the wherewithal to make it in the United States…

Presented with the Koff Award by the Roundtable, Jamieson said she was honored.

“This means a great deal to me,” she told them. Koff “was a person who embodied the values of the public school superintendents with whom he worked.”

She spoke of “how much [Koff] meant not simply to his own immediate community… but to those who cared more broadly about finding ways to make public schools as resilient as they can be. He wanted to ensure… that we understand how desperate the situations of some of the students in some of these schools are, and to ensure how much the schools do to try not simply to see that students get an education, but that they are fed and that they are cared for.”