Annenberg Public Policy Center Director Kathleen Hall Jamieson introduced him as one of the few polymaths she’s met in her life, very few people about whom you could genuinely say they are “Renaissance people.” Tom Wheeler is one, she said, a contemporary “Marshall McLuhan, without the jargon.”

As Chairman of the Federal Communications Commission from 2013-17, Wheeler was instrumental in laying the groundwork for the adoption of net neutrality, privacy protections for consumers, and increased cybersecurity. On November 15, 2018, Wheeler delivered the 2018 Annenberg Lecture, sponsored jointly by the Annenberg Public Policy Center and the Annenberg School for Communication. 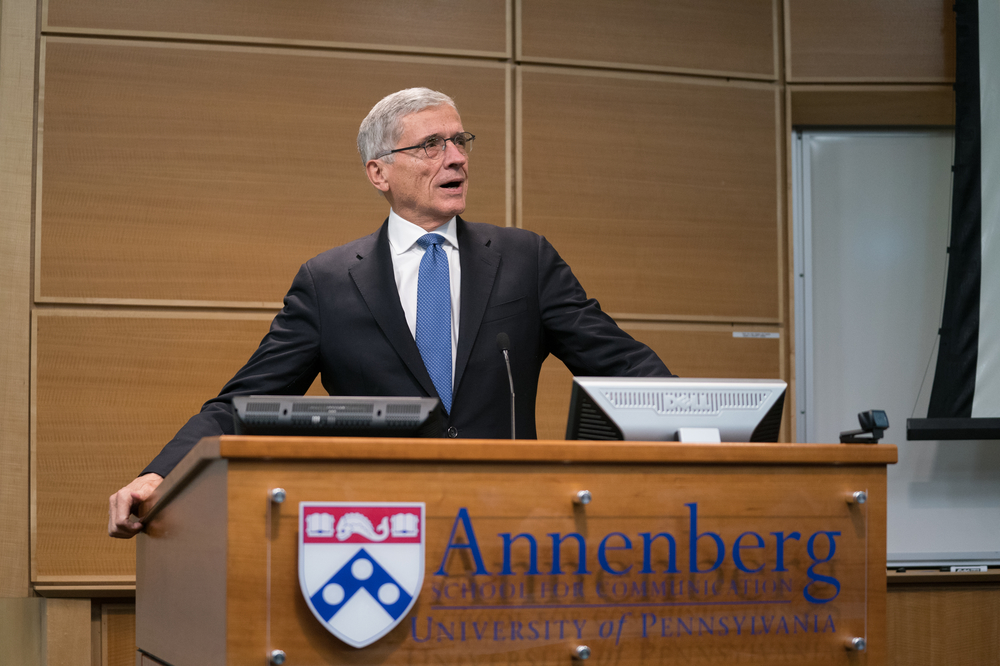 With a lecture entitled “Who Makes the Rules in the New Gilded Age?” Wheeler made the connection between the wealthy industrial barons of the 19th century and the tech moguls of today. In much the same way that the 19th and early 20th century captains of industry made their own rules for their newly-invented markets – until government stepped in – Wheeler sees the same thing happening with the dominant tech companies of today. In both cases, their corporate rise has brought great wealth and product value, but also steep increases in inequality and non-competitive markets.

“New technology and the internet create an economic and social instability and insecurity that plays into the hands of those at the extremes of both political thought and marketplace activity,” Wheeler said.

Technology, he explained, also gives disruptive forces the tools to exploit the resulting dissatisfaction they have stirred up. In part, he said, technology is playing a role in the recent resurgence of populism, nationalism, protectionism, Brexit, Trump, the rise of the alt-right, and increased calls for socialism.

“Corporate digital autocrats collect personal information and exploit it to control markets,” Wheeler said. “Political digital autocrats use the internet to spy on their citizens and target attacks on the democratic process.”

At the end of the Gilded Age, lawmakers had to step up and create legal guardrails that favored the public good over the few wealthy.

In this new 21st century Gilded Age, says Wheeler, “whether or not we step up to that responsibility is the challenge of our era. We need the benefits of technology to work for the common good.”

The annual Annenberg Lecture brings to Penn leaders in academia, politics, public policy, and the media. It combines two previous lectures, the Walter and Leonore Distinguished Lecture in Communication, which started in 1992, and the Leonore Annenberg Lecture in Public Service and Global Understanding, which began in 2006. Both series, and the subsequent single lecture, honor Ambassador and Mrs. Annenberg, without whose vision and support the Annenberg School and Annenberg Public Policy Center would not exist.