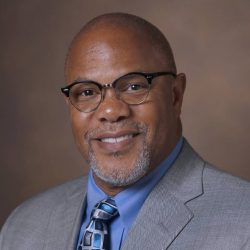 Kevin B. Johnson, M.D., M.S., is Informatician-in-Chief, Cornelius Vanderbilt Professor and Chair of Biomedical Informatics, and Professor, Pediatrics, at Vanderbilt University Medical Center. He received his M.D. from Johns Hopkins Hospital in Baltimore and his M.S. in Medical Informatics from Stanford University. In 1992 he returned to Johns Hopkins where he served as a Pediatric Chief Resident. He was a member of the faculty in both Pediatrics and Biomedical Information Sciences at Johns Hopkins until 2002, when he was recruited to Vanderbilt University. He also is a Board-Certified Pediatrician. Dr. Johnson is an internationally respected developer and evaluator of clinical information technology. His research interests have been related to developing and encouraging the adoption of clinical information systems to improve patient safety and compliance with practice guidelines, and the development of computer-based documentation systems for the point of care. He was the Chief Informatics Officer at Vanderbilt University Medical Center from 2015-2019. Dr. Johnson is the author of over 130 publications and books or book chapters. He is a member of the VUMC Academy for Excellence in Education. Nationally, he is a member of the Council of Councils for the NIH, leads the American Board of Pediatrics Informatics Advisory Committee, and chairs the National Advisory Committee for the Robert Wood Johnson Foundation Harold Amos Medical Faculty Development Program. He was elected into the American College of Medical Informatics in 2004, the Academic Pediatric Society in 2010, and the National Academy of Medicine (Institute of Medicine) in 2010. As a communicator of science to lay audiences, he has produced two documentaries and hosts an active podcast reaching an international audience.