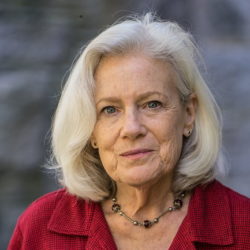 KC Cole, a professor emerita at USC Annenberg’s School of Journalism, is science writer in residence at the Annenberg Public Policy Center for 2019-20. A self-described “accidental journalist,” she is a former science writer for the Los Angeles Times who also has been published in Discover, Wired, The New Yorker, Quanta, The New York Times, The Smithsonian, Columbia Journalism Review, Newsweek, Esquire, Ms., and The Washington Post, among others. Her work was featured in “The Best American Science Writing 2004” and 2005, and “The Best American Science and Nature Writing 2002.” She is the author of eight nonfiction books, including “Something Incredibly Wonderful Happens: Frank Oppenheimer and His Astonishing Exploratorium,” a 2009 memoir/biography of her late mentor, the self-proclaimed “uncle” of the atomic bomb and founder of San Francisco’s world-renowned “museum of awareness,” the Exploratorium. Cole has contributed radio commentaries to American Public Media’s Marketplace and to KPCC, Southern California Public Radio. Among her most treasured awards are the American Institute of Physics prize for science writing, the Los Angeles Times award for Explanatory Journalism, the Edward R. Murrow Award for “thoughtful coverage of scientific controversies” from the Skeptics Society, and the Exploratorium’s public understanding of science award, presented by Frank Oppenheimer the year before his death. Cole, who growing up “was never much interested in science,” is a lifetime honorary member of Sigma Xi, the world’s largest scientific organization. Cole likes to play with the natural connections between science, art, politics and whatnot, and has hosted an irregular series of events exploring these intersections at Santa Monica Art Studios known as Categorically Not!