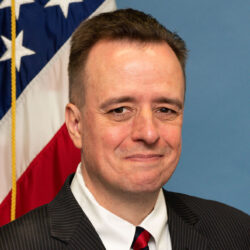 David Joanson is the executive director of the Center for Ethics and the Rule of Law (CERL) at the University of Pennsylvania. He entered on duty as a Special Agent with the FBI in 1998 and was assigned to the Philadelphia Division’s general white collar crime squad, where he was the case agent on some of the division’s most significant white collar investigations and successful prosecutions. In 2007, Joanson was appointed as a Special Assistant United States Attorney for the Eastern District of Pennsylvania. In 2010, he was promoted to the position of Supervisory Special Agent and Associate Division Counsel. In 2014, Joanson was promoted to the position of Chief Division Counsel for the Philadelphia Division of the FBI. The Philadelphia Division is the FBI’s 9th largest office with over 320 agents and 700 total employees. Joanson served as the Chief Ethics Officer for the FBI in Philadelphia and has attained a Leadership Professional in Ethics and Compliance Certification. Joanson is an active member of the State Bar of California as well as the Southern, Central, Northern and Eastern Districts of California and the Eastern District of Pennsylvania. He received his J.D. from California Western School of Law, San Diego, Calif., and his B.A. from Stony Brook University, N.Y.