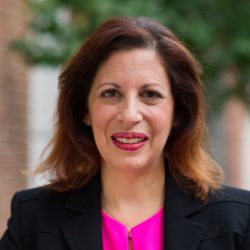 Claire Finkelstein’s current research focuses on ethics and rule of law issues in national security law and policy. In 2012, Finkelstein founded and became faculty director of the Center for Ethics and the Rule of Law (CERL) at Penn Law, a nonpartisan interdisciplinary institute that promotes the rule of law in modern-day conflict, warfare, and national security. In 2019, she was named Senior Fellow at the Foreign Policy Research Institute (FPRI). An expert in the law of armed conflict, military ethics, and national security law, she is a co-editor (with Jens David Ohlin) of The Oxford Series in Ethics, National Security, and the Rule of Law, and a volume editor of its four titles thus far: Targeted Killings: Law & Morality in an Asymmetrical World (2012), Cyber War: Law and Ethics for Virtual Conflicts (2015), Weighing Lives in War (2017), and Sovereignty and the New Executive Authority (2018). She has briefed Pentagon officials, U.S. Senate staff, and JAG Corps members on issues in national security law and practice. Her prior scholarly work focused on criminal law theory, moral and political philosophy, jurisprudence, and rational choice theory. She is also the editor of Hobbes on Law (Ashgate Publishing, 2005) and is currently completing a book called Contractarian Legal Theory.