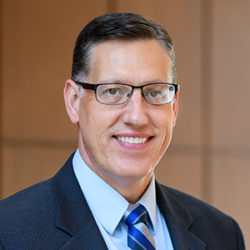 Christopher Jacobs’ research focuses on the intersection of international law and national security law. A nonresident senior fellow, Jacobs explores the constitutional underpinning of domestic war powers authority and the balance of war powers between the executive and legislative branches. Grounded in his experience as a Judge Advocate in the U.S. Army, he is particularly interested in the impact that emerging legal regimes and advancing technologies may have on the law of armed conflict, as well as the disparity between constitutional criminal procedure and military justice. Prior to joining the Center for Ethics and the Rule of Law, Jacobs culminated his 25-year Army career as an Assistant Professor in the Department of Law at the United States Military Academy, where he taught National Security Law, Advanced Law of Armed Conflict, and Constitutional and Military Law. As a JAG officer, Jacobs served overseas (Korea, Germany, Kosovo, and Afghanistan), where he advised commanders on international and operational law matters, served as the Rule of Law officer for U.S. forces in Afghanistan, and tried courts-martial cases as a defense attorney and later as a prosecutor.