Kathleen Hall Jamieson, director of the Annenberg Public Policy Center of the University of Pennsylvania and professor of communication at the university’s Annenberg School for Communication, was awarded the 2020 Public Welfare Medal from the National Academy of Sciences during a virtual ceremony last weekend. 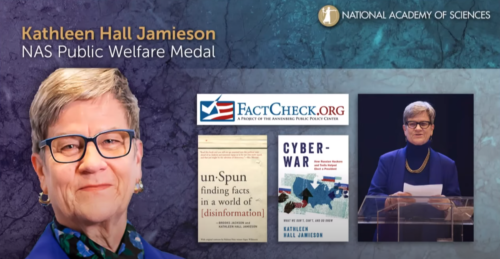 The National Academy of Sciences (NAS) announced in January that it would bestow its most prestigious award on Jamieson, a scholar of political and science communication, for her “non-partisan crusade to ensure the integrity of facts in public discourse and development of the science of scientific communication to promote public understanding of complex issues.”

At the live-streamed awards ceremony on April 26, 2020, part of the NAS’s 157th annual meeting, NAS President Marcia McNutt said Jamieson’s “approach to science communication and her political analysis have proven to be invaluable national treasures … The integrity of science relies on a respect for facts. The integrity of facts [relies], in no small measure, on Kathleen Hall Jamieson. We are thrilled to present her with our highest honor and our thanks.”

In her acceptance speech, Jamieson spoke about the importance of scientists choosing precise language that digests their science and communicating their knowledge to policymakers and the public in intelligible terms before deceptions about it can take hold.

She also explored the failure of her own response to political ads in the 1988 presidential campaign that indicted the supposed “revolving door prison [furlough] policy” of the Democratic contender. Instead of highlighting the research showing that so-called furloughs from prison reduce reincarceration by providing opportunities for individuals to readjust to society, Jamieson said that she focused on a narrow correction of factual inaccuracies.

In the wake of the 1988 controversy, the number of furloughs dropped across the United States. Had she focused more broadly on the inaccurate language, Jamieson lamented, “we might have had this important program better protected.”

In contrast, Jamieson praised scholars who formulated the concept “socioeconomic determinants of health” to focus attention on the causes underlying health disparities such as those evident in the higher rates of hospitalization and death among African Americans during the COVID-19 pandemic.

Jamieson’s latest book, “Cyberwar: How Russian Hackers and Trolls Helped Elect a President” (2018, Oxford University Press), which won the Association of American Publishers’ 2019 R.R. Hawkins Award, will be published in an updated second edition this spring.