From Autism to Zika: Engaging Rhetorical Communication When the Public Has as Much Trouble Understanding Science as Scientists Do in Explaining It: Marin Pearson Allen is Deputy Associate Director for Communications and Public Liaison and Director of Public Information in the Office of the Director at the National Institutes of Health (NIH). Before she joined the NIH two decades ago, she was a tenured, full professor and founding department chair at Gallaudet University. She continues to teach, and has earned two Emmy Awards for productions airing on the Discovery Channel and PBS. Abstract: How truthiness, factoids, emotivism, the death of the Fairness Doctrine, Unspeak, QUBE and its ilk have fed a fundamental loss of appreciation and application of  logos, understanding of ethos, and an elevated use of pathos in discourse about health and science. The NIH is a small city, has a footprint in every state and territory, and is, especially in emergencies, an international partner. Using an example from the Center for Science Communication of the Japan Science and Technology Agency describing the fragility of public trust, and examining the NIH’s efforts with communication officials at grantee institutions, Dr. Allen will raise five questions that may contribute to a broader understanding of how to move forward in a “moonshot” environment when we’re “telling stories” – true or not.

Marin P. Allen, Ph.D., is the former Deputy Associate Director for the Office of Communications and Public Liaison (OCPL) and Director of the Public Information Office in OCPL, in the Office of the Director of the National Institutes of Health (NIH). OCPL is responsible for all phases of internal and external strategic communication. The Public Information Office is a focal point for health and science writing, health literacy, clear communication, plain language, cultural respect, and language access initiatives. It is responsible for NIH programs and resources for the public, including publications in print and on the web.Prior to 2004, Dr. Allen was the Communication Director and Public Liaison Officer for the National Institute on Deafness and Other Communication Disorders (NIDCD) at NIH. She led the NIDCD’s first communications, legislation, and policy office programs. Dr. Allen has 30 years of communications, public health education, outreach, and media relations experience.Before joining NIH, she directed public relations for Gallaudet University from 1988 to 1990. From 1981 to 1990, she was on the Gallaudet faculty and became a tenured, full professor and Chair of the Department of Television, Film, and Photography in the School of Communication. Prior to Gallaudet, Dr. Allen was a media specialist with the White House Conference on Aging. Earlier in her career, she was a faculty member in communications at the University of Maryland, College Park.Dr. Allen has two Emmy awards for programs she produced that aired on the Discovery Channel and PBS. She is also a two-time CINE award winner. She has been involved in trans-agency efforts in health literacy, cultural respect, behavioral research communication, women’s health, and health communication. Dr. Allen was the NIH representative to the HHS working group on health literacy for more than 10 years. For the past two years, she has served on the National Academy of Sciences Health Literacy Roundtable. During her academy experience, Dr. Allen has taught and continues to teach in all areas of public communication and health policy. 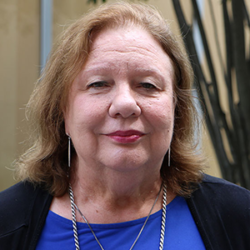