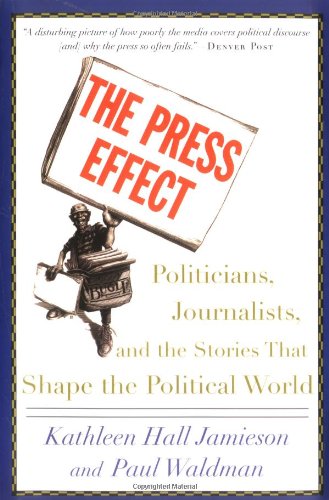 Was the 2000 presidential campaign merely a contest between Pinocchio and Dumbo? And did Dumbo miraculously turn into Abraham Lincoln after the events of September 11? In fact, Kathleen Hall Jamieson and Paul Waldman argue in The Press Effect, these stereotypes, while containing some elements of the truth, represent the failure of the press and the citizenry to engage the most important part of our political process in a critical fashion. Jamieson and Waldman analyze both press coverage and public opinion, using the Annenberg 2000 survey, which interviewed more than 100,000 people, to examine one of the most interesting periods of modern presidential history, from the summer of 2000 through the aftermath of September 11th.
How does the press fail us during presidential elections? Jamieson and Waldman show that when political campaigns side-step or refuse to engage the facts of the opposing side, the press often fails to step into the void with the information citizens require to make sense of the political give-and-take. They look at the stories through which we understand political events-examining a number of fabrications that deceived the public about consequential governmental activities-and explore the ways in which political leaders and reporters select the language through which we talk and think about politics, and the relationship between the rhetoric of campaigns and the reality of governance.
The Press Effect is, ultimately, a wide-ranging critique of the press’s role in mediating between politicians and the citizens they are supposed to serve.