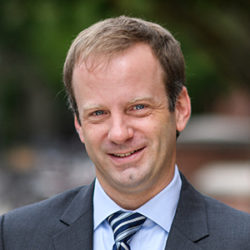 Christopher Welsh has been executive director of the Center for Ethics and the Rule of Law since May 2018. As executive director, Welsh is responsible for supervising the management of the center, including programming, budgeting, and the summer internship program. Before joining the CERL, Welsh worked at the Defender Association of Philadelphia for almost 13 years. While there, he worked his way through the ranks of the organization from trial lawyer to deputy defender of operations and systems development. A native of the Philadelphia area, Chris earned his B.A. in Political Science from St. Joseph’s University and his J.D. from Temple University. He spent a year volunteering as a community organizer with the Jesuit Volunteer Corps after graduating from college and has been a Big Brother through Big Brother Big Sister of Southeastern Pennsylvania for the last 12 years. He is married and has two daughters.